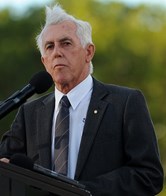 At the age of 20, 'Charlie' (as he is universally known) was appointed club professional at Royal Queensland Golf Club. In 2003, he retired after 45 years in the job and his service was acknowledged with an Honorary Life Membership.

He is regarded as one of the world’s foremost golf coaches and his name is synonymous with British Open winner Greg Norman, US PGA Champion Wayne Grady, Women’s British Open Champion Corinne Dibnah, and many other outstanding professional and amateur players.

In 1958, Charlie was appointed club professional at RQGC, thereby curtailing a promising playing career. In 1962 he was elected president of the Queensland Professional Golfers’ Association. Not long after, Charlie was instrumental in establishing the Sunshine Circuit for professionals (also known as the 'Troppo Tour'), played throughout Queensland, Northern Territory and New Guinea.

Charlie was appointed Queensland state coach in 1982 (for both the senior and junior amateur teams), under the auspices of the Queensland Golf Union and, in 1987, assisted in setting-up the Greg Norman Junior Golf Foundation.

Charlie was awarded the Medal of the Order of Australia (OAM) in 1993 and the Australian Sports Medal (ASM) in 2000 for his services to golf.

In recognition of his contribution to the re-establishment of hickory golf in Queensland, Charlie was awarded Life Membership of  Queensland Hickory Golf Inc. at the new body’s inaugural Management Committee meeting in June 2020.

Educated at Wynnum Central State School and Wynnum State High School in the 1940s and 50s, Peter was awarded Bachelor of Medicine and Bachelor of Surgery Degrees at The University of Queensland in 1963. Five years later by examination, he obtained a Membership of the Royal College of Obstetricians and Gynaecologist, London. This was elevated to Fellowship in 1981 and then he was also granted a Fellowship of the Royal Australian College of Obstetricians and Gynaecologist in 1979.

For recreation, Peter joined Royal Queensland Golf Club in 1959 and has been a member ever since. He played intervarsity golf for The University of Queensland (1961–63) and was selected in the Australian Combined Universities Golf Team, University Blue, in 1962.

Peter served as Club Captain at Royal Queensland Golf Club in the years 2001 and 2002 and was a club representative in Open A-Grade and Senior-A Grade Pennant Teams from 1960 until 2007. He was Queensland State Mixed Foursomes Champion (Open) in 1984 and Hyatt Coolum Golf Club Club Champion in 1996.

Peter was a Foundation Member and the inaugural Captain of Australian Golf Heritage Society (Queensland Chapter) and was made a Life Member of Australian Golf Heritage Society in 2019. A few months later, along with partner Bradley Tatnell, Peter won the Australian Hickory Shaft Foursomes Championship (net) at Elanora Country Club, Sydney. Notably, the next day he also won the 2019 Australian Hickory Championship (gross) for the over 80's division.

In recognition of his contribution to the re-establishment of hickory golf in Queensland, Peter was awarded Life Membership of  Queensland Hickory Golf Inc. at the new body’s inaugural Management Committee meeting in June 2020.

Having Scottish forbears on both maternal and paternal sides, with surnames Scott and Saw respectively, Andrew was a Founding Member and Captain of Australian Golf Heritage Society (Queensland Chapter) from 2014 until 2020. His golfing career began at age seven or eight on Victoria’s Mornington Peninsula — playing with a set of a cut-down George Nicoll hickory-shafted ‘Indicator’ irons, inherited from his paternal grandfather. He was introduced to the lore, legends and etiquette of the game by his loving grandad Albert, father ‘Jack’ and uncle ‘Teddy’ Saw (an expert club-thrower), while playing Portsea, Sorrento, Mornington, Rosebud and Flinders Golf Clubs. He is currently a member of Royal Queensland and Lowood & District Golf Clubs.

With a background in education and the arts, Andrew's eponymous Bowen Hills art gallery has specialised in contemporary Australian, Polynesian and Melanesian art since 2000. For the fifteen years prior, he worked in R&D software development in the IT sector — both locally and in the USA. Preceding that he worked as a federal public servant.

Described by Geoff Shackelford as the ‘Sam Neill’ of hickory golf, Perry Somers is regarded by many as the finest hickory golfer of the modern era.

In 2012, Perry and Randy Jenson — the best American hickory golfer of the modern era — re-enacted a legendary 1870 match between Old Tom Morris and Willy Park Snr, played on successive days over the Old Course St Andrews Links, Prestwick Golf Club, North Berwick Golf Club and The Musselburgh Golf Club. Unlike the original — where Old Tom walked off the fourth green on the final day and into Mrs Foreman's pub, refusing to return to the course due to the abominable behaviour of Willy Park’s supporters — Perry persevered to win 3&2 after being 7 down on the first day.

Perry’s contribution to Queensland, Australian and world hickory golf is inestimable and we are glad he has accepted the position of  HGQ 'Roving Ambassador' and are proud to award him the distinction of 'Honorary Member'.

Note: We at Hickory Golfers Queensland like to think of Sam Neill as the ‘Perry Somers’ of the film world.